A brief history of Financial Domination

What started as a few wealthy men hiring “submissive” women to give them cash gifts is now a multi-billion dollar industry, with thousands of women around the world doing this as a full-time job. As we have seen, the exact moment when Financial Domination started to be a thing is hard to identify. The late 1990s and early 2000s saw an increase in this phenomenon, with websites like My Path to Financial Domination gaining a large following. Around the 2010s, the scene had already changed noticeably. Forums like Fetlife were buzzing with discussions about Financial Domination and the number of women doing this as a profession was increasing. This is when it became clear that the phenomenon was here to stay.

How popular is Financial Domination today?

The future of Financial Domination

To me, this is just total IGNORANCE of what a Findom Goddess in cam really does and, moreover, a way to cover the fact that they don’t do cams because they simply can’t….they need photoshop to look good.

As you all know, i’ve always served in cam…and there is just one simple reason: beauty makes me weak…and a webcam doesn’t lie (till a certain extent). You can’t post fake pictures, you can’t edit your image with Photoshop. It’s You, Your beauty, Your attitude…in front of me, in real time.

And that’s why i don’t think this is for everyone: the web is full of “cam findomme wannabe”, girls that i can probably visit once, maybe twice…then just stop forever even considering visiting them…because they don’t have “that something”.

And that’s probably why many “non cam Goddesses” hate Goddesses like OneGreatDiva, Alexya, Ishtar or  MsClassy (to name a few that built their EMPIRE through cams): they know it’s impossible for them to be as gorgeous, as irresistible, as naturally dominant…so they prefer to hate them and say nasty things about them.

What do you think? 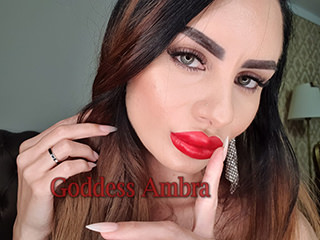